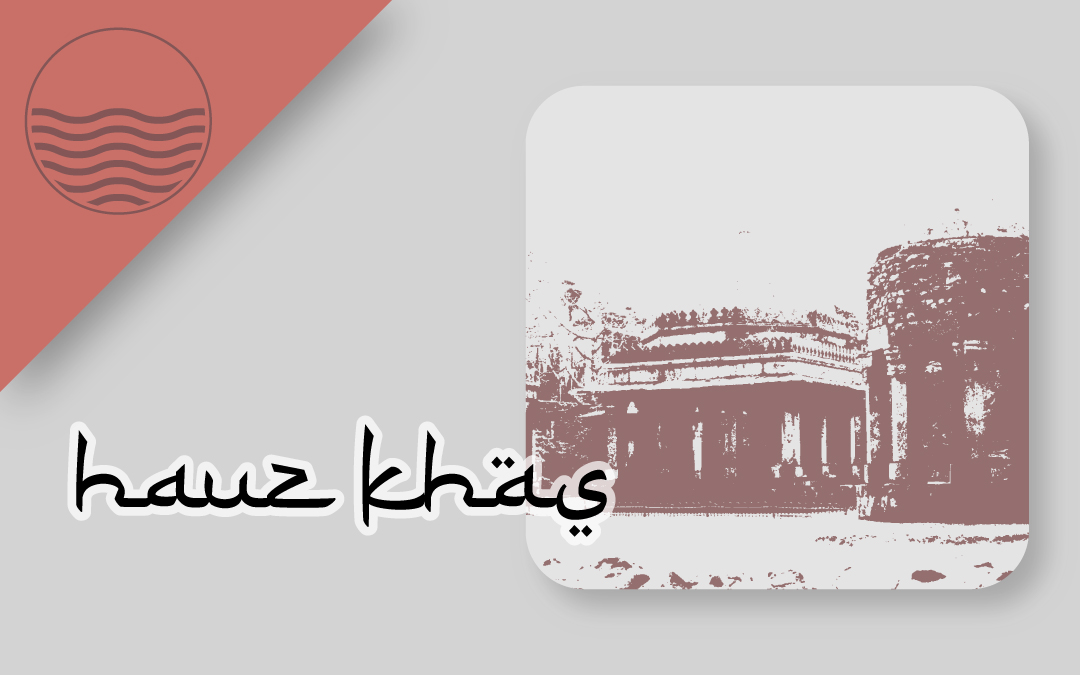 The tank was constructed by Alauddin Khilji and is known as Hauz-i- Alai or Hauz-i-Alai. The tank is square in shape with each side measuring about 600 meters and covering an area of over 70 acres. Later, the tank was repaired by Feroz Shah Tughlaq during his reign and other structures were added to the complex.

Today, the name Hauz Khas corresponds to an area associated with the upper class elite of New Delhi. However, it was originally a water tank constructed by Alauddin Khilji in the 14 th century to solve the water crises and was known as Hauz-i Alai or Hauz- i Khas. The tank is square in shape with each side measuring about 600 meters and covering an area of over 70 acres. Later, during the reign of Firoz Shah Tughlaq, the tank was cleared off the siltation that had occurred over the years. Other structures that surround the tank are: the tomb of Firoz Shah Tughlaq that overlooks the tank, Feroz shah’s Madrassa and a mosque.

The Tomb of Feroz Shah Tughlaq The tomb overlooks the tank and is located on the south-eastern side of the latter. It rests on a plinth and covers an area of 44feet and 6 inches sq. It is constructed of rubble masonry that is plastered. The walls are decorated with red stone and marble, capped with battlements made of red stone with floral designs. The battlements of the drum from which the dome of the tomb rises is of the kangura design. On the northern and southern ends is the madrassa built by Feroz Shah while on the east and south are two archways containing a doorway. Therefore, main entrance is on the southern side and is bounded by a court. The court is enclosed by a wall made of grey stone. There is an inscription on the archway of the southern door that mentions some repairs made during the reign of Sikander Lodhi. Inside the tomb are four graves that are uninscribed. Three graves out of four are made of marble while the last one on the east is of rubble and plaster and is in ruined condition. The centremost grave is ascribed yo Feroz Shah Tughlaq. The tomb chamber which is square in shape becomes octagonal at first and then circular to match the outline of the dome at the drum level with the use of squinches. The arches inside are decorated with incised with quranic inscriptions and the inner dome is decorated with coloured bands. The walls on the north and west contain small and narrow arched openings that open into the madrassa. Madrassa by Feroz Shah Tughlaq This madrassa, constructed by Feroz Shah Tughlaq, was made of rubble masonry and dressed stone. Initially, it comprised of a series of double storeyed buildings rising from Feroz Shah’s tomb from the north and the west. However, the entire structure has not survived and the portions that now remain include two chambers adjacent to the tomb. These are double-storeyed and have arched dalans and windows overlooking the tank. Mosque The mosque is located on the northern end of the madrassa. It has a central courtyard encompassing arched dalans on the southern and western sides. The prayer chamber on the western side is nine bayed and single aisled. The wall on the west consists of mihrab and arched window openings. These arched window openings have projecting balconies, a unique in a mosque. The central balcony has stairs on the northern and southern ends that descend into the tank. There is another staircase in the mosque that leads to the roof of the building. To the east of the southern face of the mosque is situated a domed structure considered to be a gateway to the mosque.

a. M. Athar Ali, “Capital of the Sultans: Delhi During the Thirteenth and Fourteenth Centuries”.
b. https://en.wikipedia.org/wiki/Hauz_Khas_Complex
c. “Monuments of Delhi: Lasting Splendour of the Great Mughals and Others. Volume III Mehrauli Zail.”1997.