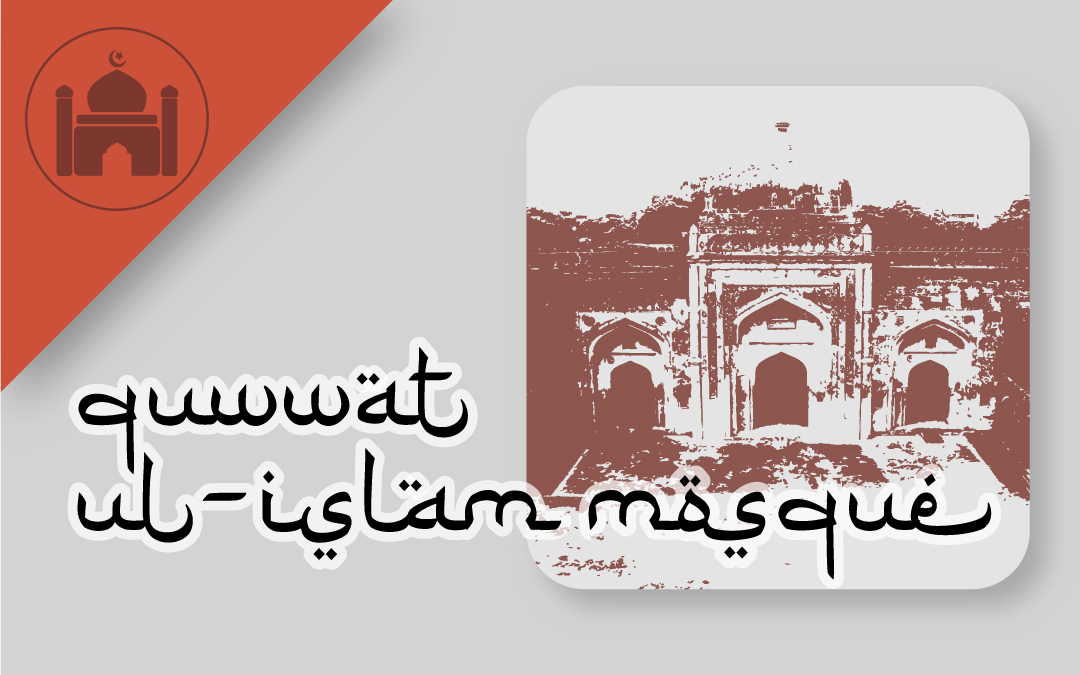 Qutub-ud-din Aibak, a slave born in turkey, became the king of Delhi and ordered the building of the first mosque in Delhi. Founder of the Mamluk (slave) dynasty, he rose to power as a general during the invasion and usurped the thrown as the sultan after Ghori was killed.
He ordered the destruction of 27 Hindu and Jain temples to furnish building materials for the construction of the mosque. “The glory of Islam” as the name literally translates to, was hastily constructed with an army of Hindu craftsmen who were forced to comply the royal order.
An inscription on the wall thus reads- “This fortress was conquered and this masjid jami was built during the months of the year 587 by the great and mighty commander-in-chief kutb-ul-dawlat-wa-uldin, the commander of commanders, aibeg sultan. May god exalt his helpers. Materials from 27 idol temples, each of which cost twice thousand into thousand diliwals, have been used in this masjid. May almighty God send mercy on him, who prays for the rest of the builder.”
“The conqueror entered the city and its vicinity was freed from idols and idol-worship; and in the sanctuaries of the images of the gods, mosques were razed by the worshippers of the one god.” — Quṭb al-Dīn Aibak’s chronicler, Hasan Nizami, taj-ul-maasir.The mosque was later patronised by Iltutmish and Alauddin Khilji who extended the mosque..

The source material for the construction of the mosque came from the spoils of the Hindu and Jain temples. To keep up with the Quranic tradition of not depicting animate figures, the temple columns and beams were made devoid of animate depiction. Therefore, architecturally the first mosque in India does not very well fit into the common understanding of the mosque and has reminisces of the Hindu and Jain temples. The structure of the mosque consisted of a colonnade that surrounded an open enclosure. The mosque stood on a plinth and the west part of the complex was enlarged to house a prayer hall in the direction of Mecca. In the later years, a free-standing screen of arches was constructed in front of the prayer hall. Subsequently, Qutub-ud-din Aibak’s successor Shamsuddin Iltutmish further enlarged the mosque by three times the original size. This was done by constructing another colonnaded enclosure around the mosque and the arched screen was extended up to the new enlarged prayer hall. Interestingly, the method of expanding the complex by building colonnades in a concentric fashion resembles the circumambulatory passages known as ‘parikarmas’ around the shrine in Hindu temples. A further extension was done by sultan Alauddin khalji in the 14 th by constructing another colonnade making the complex six times the original size. He also made additions such as the Alai Darwaza and the Alai Minar. The prayer hall had five shallow domes that were made by corbelling technique, which was the only method that the native artisans knew. The corbelling technique produced a stepped pyramidal structure which was then thickly plastered to produce a shallow dome. In the case of the arched screen, it initially had five arches that were produced by corbelling technique that was smoothened to produce the arch.