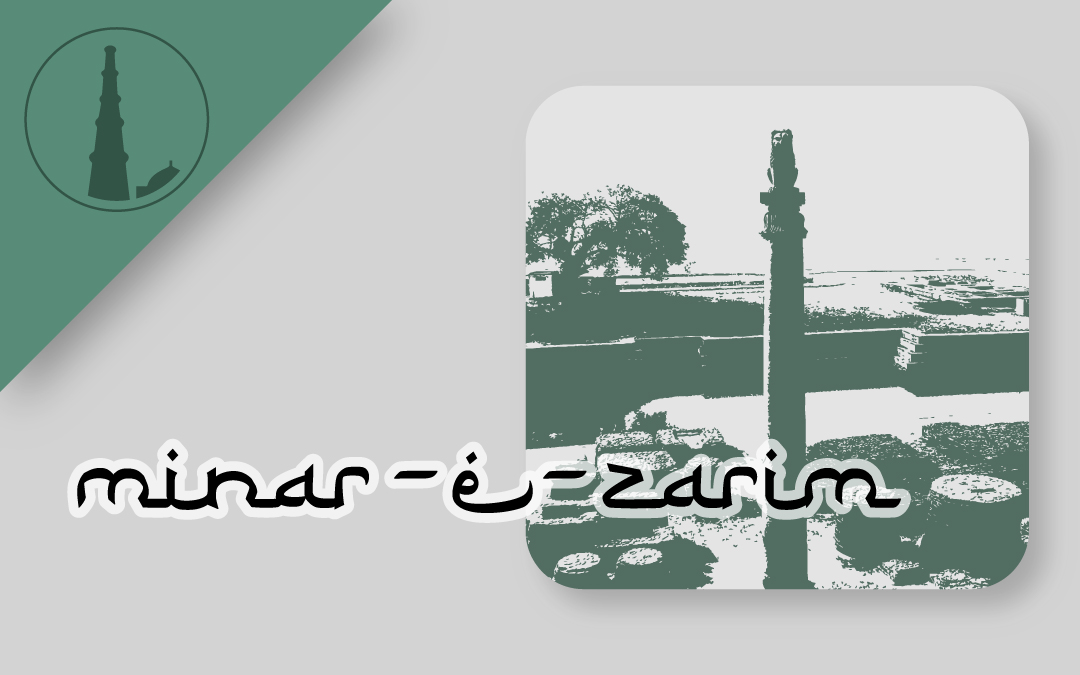 The ‘minar-i-zarrin’ (golden minar) or the Asokan pillar is made of Chunar sandstone and is a monolith. It was brought from Topra, originally erected there by King Asoka in the 3rd century B.C.E bearing a Pali inscription in the Brahmi script. Timur who invaded India in 1398 C.E. was awestruck and declared that he had never seen anything like the monoliths ever in all the lands that he had travelled.
Today, it stands at the Kotla Feroz shah on a structure known as the Lat Pyramid. However, great skill was required to remove both the Asokan Pillars which were then brought to the site of Delhi. Huge quantities of “cotton of the sembal” (silk cotton tree) were used. These were then kept on the ground around the pillars so that when the pillars are removed they fall softly on the cushion made for it below. They were then packed in reeds and raw skins and put on a carriage consisting 42 wheels, where each wheel was attached to a rope that was pulled by 200 men. When they reached Delhi, they were put on boats traversing through Yamuna and finally reaching Ferozabad. The pillars were then re-installed: the Delhi-Topra pillar on the top of Lat Pyramid while the Delhi-Meerut Pillar on the top of Khush-i-Shikar. No one in the entire Sultanate could read what was written on the pillar. It is quite a wonder that there were no accidents while erecting ‘minar-i-zarrin’ on the top of the Lat pyramid as its masonry is not one of the finest and strongest.

The Asokan pillar is made of Chunar sandstone and is a monolith. It was brought from Topra. It was originally erected by King Asoka in the 3 rd century B.C.E bearing a Pali inscription in the brahmi script. It is 42 feet 7 inches in height with 35 feet being polished and the remaining portion rough. About 4 feet 1 inch of the pillar is buried. The diminution of the pillar is around 0.39 inches per foot with the diameter at the top and base being 25.3 inches and 38.3inches respectively. The total weight of this pillar is about 27 tons.

a. “Monuments of Delhi: Lasting Splendour of the Great Mughals and Others. Volume II Delhi Zail.”1997
b. Welch, Anthony and Crane, Howard. “The Tughlaqs: Master Builders of the Delhi Sultanate”. 1983
c. https://en.wikipedia.org/wiki/Ashokan_Edicts_in_Delhi#Delhi-Meerut_pillar