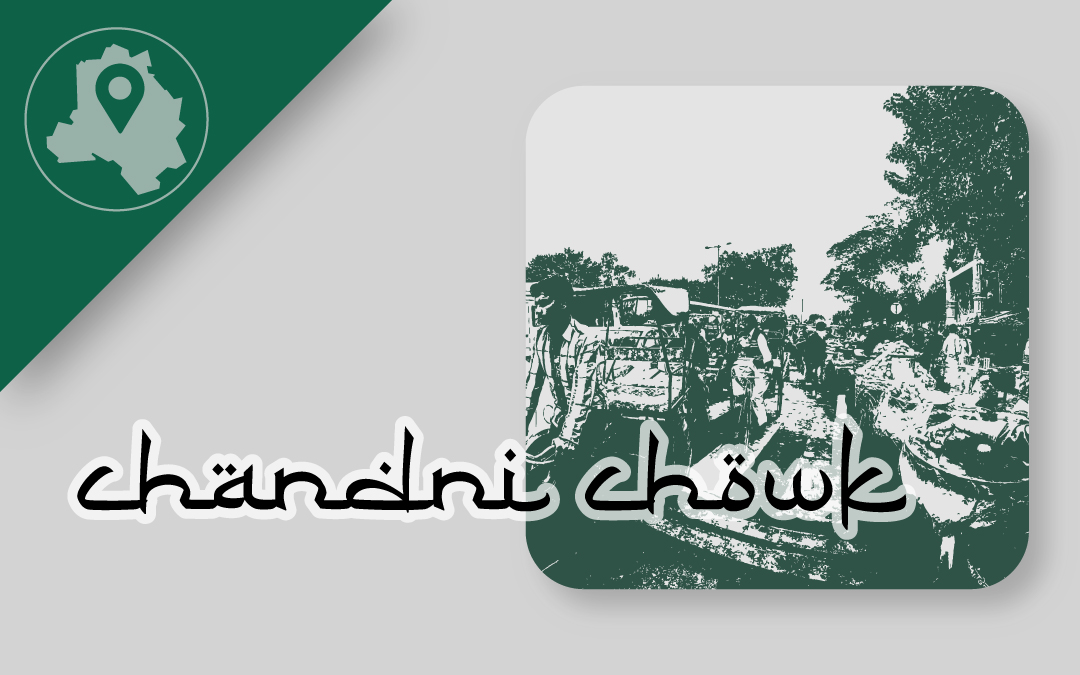 The bazaar of Chandni Chowk runs from the Lahori gate of Qila Mubarak in the east to Fatehpuri Masjid on the west. It was constructed by Jahanara Begum in the year 1650 C.E. The dimensions were: 1520 yards by 40 yards containing 1560 shops and porticos. The ‘Nahr-i-Bihisht’ (paradise canal) flowed through its centre. Initially known simply as ‘bazar’ with its small localities being named as the urdu bazaar or the camp market (ran from Lahori gate of Qila Mubarak to kotwali chabutra), ashrafi/moneychanger’s market) or Jauhari bazaar/jeweller’s market (ran from the kotwali chabutra to the chowk of Jahanara Begum), the entire area slowly acquired the named Chandni Chowk. This was named so because the octagonal chowk constructed by Jahanara Begum contained a pool which reflected the silvery-pale moonlight on certain nights. Chandni Chowk also catered to its crowd of intellectuals in the form of Qahwa Khanas, which were of special interest.
The landscape of Chandni Chowk has transformed profoundly after the Revolt of 1857. A new landmark- a fountain was added in front of the Sunehri Masjid which has given that niche the name ‘Phawwara or the Fountain Chowk’. At the centre of the square of Chandni Chowk was a Clock Tower, built by the British after the revolt, even that has not survived as it collapsed in the year 1951. The Municipal offices have also been transferred elsewhere from the Town Hall and in front of the latter people feed the pigeons, which gather there in large numbers.
The religious diversity exhibited in the single lane of chandni chowk is remarkable and is reminiscent of the culture that existed during the Mughal period. It contains Jain and Hindu temples, two mosques, a gurudwara and a church. The Jain Lal Mandir, located at the head of the lane of chandni chowk, has a well-known charity bird hospital. The temple belongs to the period of Shahjahan, so does the Jain business class which dominates the nearby Dariba kalan and mohalla dharampura. Dariba kalan or ‘Durr-e-Bebaha’, literally meaning incomparable pearl, was and is still famous for its jewellery and authentic ittar.
Today, Chandni Chowk has become a well-known culinary destination for street food. One can find here the “daulat ki chat”, sold only during the winters by street vendors, is a fluffy dessert made of milk, sugar, nuts, and saffron. Other places include: ‘Natraj’ famous for its ‘dahi bhalla’; parathe wali gali; Karim’s, purveyor of Mughlai cuisine; ‘old and famous jalebiwala’ in Dariba Kalan; ‘Kooremal kulfiwala’ at Kucha Pati Ram selling fruit flavoured ice-creams, much before Naturals; ‘Jain Sandwich and Coffee’ in the card market at Chawari Bazaar; freshly baked nankhatais sold by hawkers and many more. Bakeries sell rusks known as ‘nargisi papey’. They are named so because the khas-khas sprinkled over them resemble the nargis flower. Sweet shops sell different varieties of halwa and other delicacies: gajar/ lauki halwa during the winter season, andarse ki goli/ suvaal during the monsoon season and habshi halwa. ‘Habshi halwa’ as the name suggests is black in colour and is made from burnt milk.