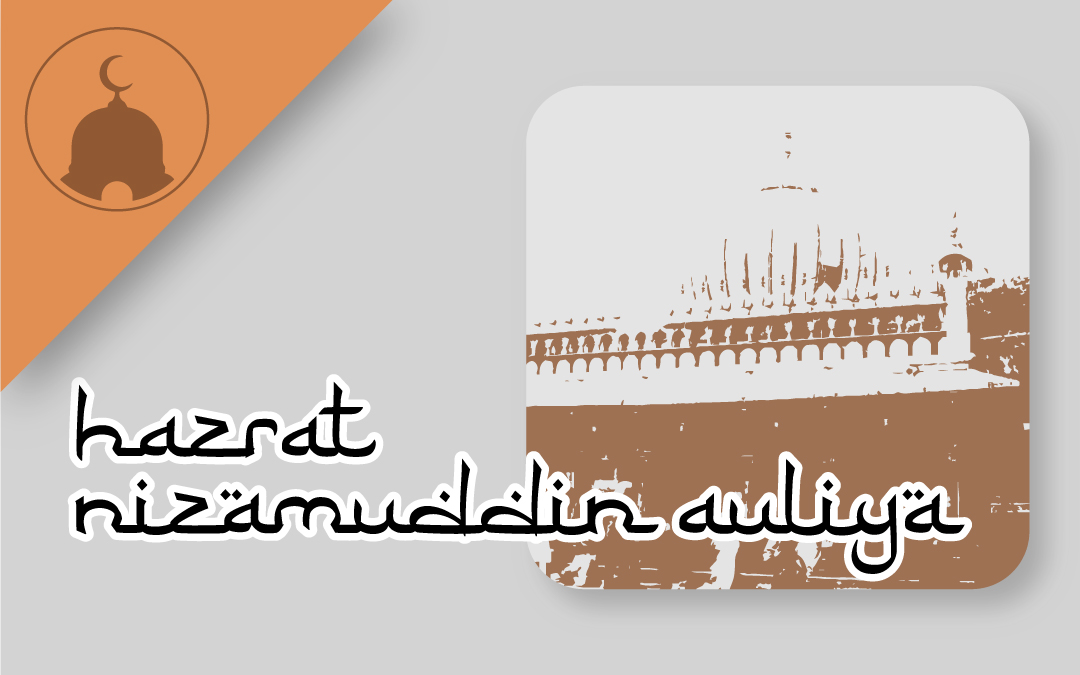 These lines have been taken from a ghazal composed by Amir Khusro in Braj Bhasha as a token of respect for his master Khwaja Hazrat Nizamuddin Auliya. Amir Khusro, a great poet, was the founding father of Qawwali, which is an integral part of the ‘sama’ congregations at Sufi shrines till today. The Sufi saint who lived in the thirteenth and fourteenth centuries C.E. established his khanqah in Ghiyaspur, a suburban area. Today, the dargah of the chishti saint stands in the bustling Nizamuddin basti, which in reality has become a graveyard, dotted with graves of Amir Khusro, Khwaja Abubukar Musalla Bardar, Khwaja Rafiuddin Harun, Khani Jahan Khan Tilangani, Atgah Khan, Jahanara, Muhammad Shah Rangeela, Mirza Jahangir, Bai Kodaldai and Mirza Ghalib to name a few. Other structures in and around the dargah complex include the following: Jamaat Khana, Baoli, Tomb of Nizamuddin Auliya, Langar Khana, Chini ka Burj and Chausath Khamba. The central room of the Jamaat Khana mosque located on the west of the tomb of shaikh was constructed by Khizr Khan, son of Alauddin Khilji. Originally, the central room was not supposed to have been a mosque, rather the tomb of Shaikh Nizamuddin. However, the Shaikh in his last moments expressed that he did not wish to be buried there and therefore, it was later converted into a mosque with two side compartments. Khizr Khan also features as a hero in Amir Khusro’s love poem ‘Khizr Khani and Deval Devi Rani’. The mystic sufi saint was popularly associated with miracles and held titles like ‘Mehboob-e-Ilahi’ (Beloved of God) and ‘Zari Zar Baksh’ (Giver of Gold). Once, when Ghiyasuddin Tughlaq was building Tughlaqabad, simultaneously, Nizamuddin was also constructing a Baoli near his khanqah. Therefore, the labourers worked at the fortress during the day and at the baoli during the night. However, the sultan was not very much pleased by this arrangement, so he stopped the oil supply that was used for lightening the lamps. The labourers took this problem to Nizamuddin who directed them to his disciple, Nasiruddin. The latter turned the water of the baoli into oil so as to facilitate the lightening of the lamps and therefore was bestowed with the title “Roshan Chiraag-e-Dilli” or “The Illuminated Lamp of Delhi”. Thus, the baoli constructed for public welfare is still functional whereas the fortress built on the foundation of pride lies abandoned and has not survived the ravages of time.

The dargah complex of the chisti saint in reality has now become a graveyard, dotted by innumerable graves, both named and unnamed. It is also surrounded by other structures due to the belief that being near the sufi saint would ensure his blessings. Below are mentioned a few of these structures: Jamaat Khana The Jamaat Khana or the ‘congregation house’ was built during Alauddin Khilji’s reign. It is one of the oldest structures in the dargah complex and is located on the western side of the Shaikh’s tomb. The material used in its construction is red sandstone and is topped by a main dome, some 15ft. in height. The main dome rests on a polygonal drum, the top of which is adorned by an interlacing pattern and pinjra cresting. The parapet wall of the roof is topped by a battlement of the spear head patter. Inside the dome, there is an inverted cup (supposed to have been of gold) hanging from the centre of the dome. The mosque comprises of a central compartment which has a low dome and was built by Khizr Khan, son of Alauddin Khilji during the lifetime of Shaikh Nizamuddin. Attached to the central compartments are side rooms, each crowned by twin domes. These side rooms were added later on probably during the rule of Muhammad bin Tughlaq. The arch on the main entrance carries a band of quranic inscriptions which can also be found on mihrabs and internal arches.

Baoli of Nizamuddin The baoli is located at the northern doorway of the chishti saint’s tomb. The internal dimensions of the baoli are 123 ft. by 53 ft. and is bounded by walls on the south, east and west. The northern side carries the steps that descend downwards. Several additions have been made to the baoli at different times by different patrons. A narrow arcaded passageway is located on the southern and eastern sides of the baoli. This passageway leads to the tomb of Shaikh Nizamuddin. The southern arcade was constructed by the son of Wahidud-din- Quraishi known as Muhammad Maruf in 1379-80. From the west side, men dive in the baoli below to seek the blessings, covering a depth of almost 60 feet.

Tomb of Shaikh Nizamuddin Several additions have been made to the tomb of Shaikh Nizamuddin and the structure originally constructed and adorned by Sultan Feroz Shah Tughlaq has not survived. The building that now remains was constructed by Faridun Khan in 1562-63 C.E. This building is almost 32 ft. sq. in area externally, consisting of a verandah paved with marble and five arched openings on each side with dimensions 5feet 6inches and 3feet 3 inches alternatively. The columns in the verandah have trefoil arches above which rests a chhaja. On the top of the chhaja is a parapet wall with pinjra cresting, crowned by dwarf domes and interspersed with small marble chhatris with gilt finials on all corners. The tomb chamber is accessible by a single door on the south side. The chamber is surrounded by marble jali-screens within sandstone frames. A bulbous dome rises from an octagonal drum marked by vertical stripes of black marble and crowned by lotus cresting topped with gilded finial. On the western wall of the tomb chamber is a gilded mihrab. The grave is covered in marble above which hangs a cotton canopy. There also exists a marble balustrade around the grave which was gifted by Khurshid Jah of Hyderabad. The structure built by Feroz Shah Tughlaq was a domed chamber with walls made up of pierced screens. Hanging from the four recesses of the dome were four chains with golden cups. Faridun Khan (Sayyid Farid Khan) constructed marble screen under the dome and the current structure. To this structure, a wooden canopy inlaid with mother-of –pearl was added by Farid Khan (Murtaza Khan) in 1608-09 C.E. The verandah around the tomb in red sandstone and marble was constructed by Khalilullah Khan in 1652-53. Other additions and repairs were done by Alamgir II in 1755-56 C.E. The pillars of the verandah constructed in red sandstone were replaced by marble pillars. Also, the parapet wall with miniature domes was added at this time. These additions were done by Nawab Ahmad Bakhsh Khan of Firozpur. To this, a copper ceiling with blue enamel work was incorporated into the verandah by Faizullah Khan Bangash in 1820-21 C.E. The current dome was rebuilt by Akbar II in 1823-24.

Langar Khana It comprises of a hall with dimensions 38feet by 28 feet. It is built in local hard stone with an arched roof that rests on 20 pillars below. It is accessible by four arched entrances on the southern side.
Tomb of Amir Khusro
Tomb of Khani Jahan Khan Tilangani
Tomb of Jahanara Chini Ka Burj
Tomb of Muhammad Shah Rangeela
Tomb of Mirza Jahangir
Tomb of Khwaja Rafiuddin Harun
Grave of Khwaja Abubakar Musalla Bardar
Tomb of Atgah Khan Chausath Khamba
Tomb of Mirza Ghalib