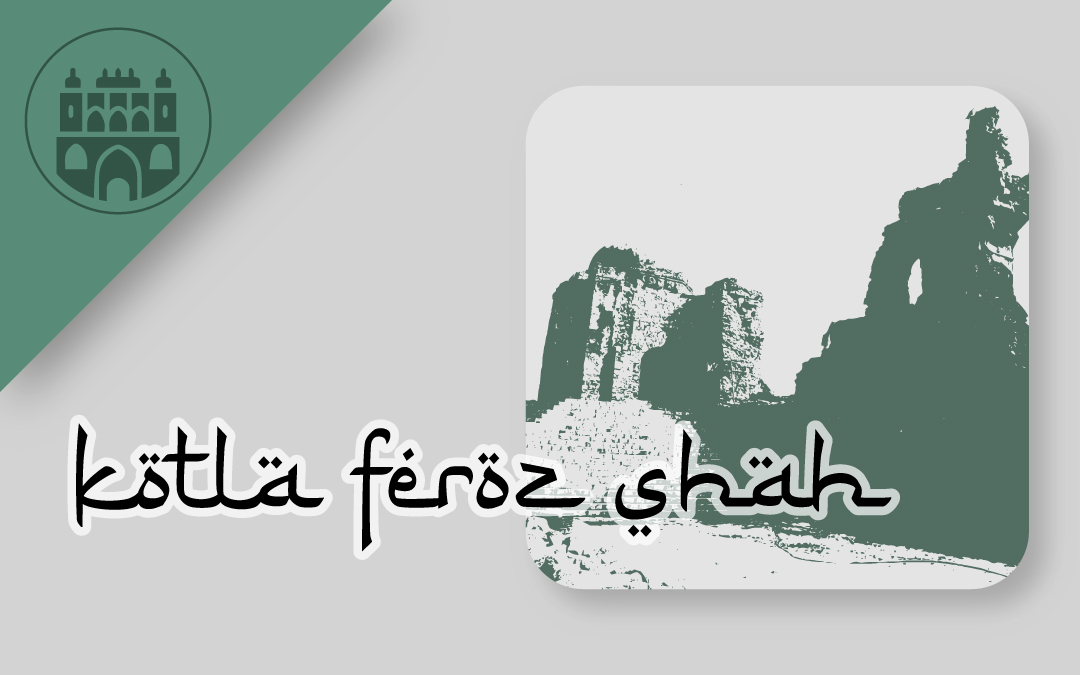 Ferozabad, founded by Feroz Shah Tughlaq, is located nine kilometres north from the southern Delhi region, stretching from Yamuna northwest to northern ridge. The city of Ferozabad was located on the banks of Yamuna, the closest to the river than any other previous city in Delhi had been. It is said that the construction material for the city of Ferozabad was taken from Siri, Jahanpannah and Qila Rai Pithora. Not much of the city has survived leaving only: Kotla Feroz Shah, Jami Masjid, The Lat Pyramid, Kushk-i-Shikar, Kalan Masjid and the Khirki masjid. There are other four mahals that have been ascribed to Feroz Shah Tughlaq based on his passion for hunting: Kushk Mahal, Malcha Mahal, Bhuli-Bhatiyari ka Mahal and Mahipalpur Mahal.
Feroz Shah Tughlaq was the cousin of Muhammad-bin-Tughlaq who came to power when the latter passed away suddenly in 1351 C.E. Afif has described Feroz Shah as having only 3 interests: governing, hunting and building. He is also known for the extensive canal and irrigation network that he lay during his reign along with various architectural and restoration works.
According to popular narrative the citadel of Feroz Shah is now considered to be inhabited by djinns. The legends associated with the djinns began after the Emergency of 1975-77. Apparently, a fakir named Laddu Shah was displaced from his original settlement at the Turkman Gate due to slum demolition drives in 1976. He hence took refuge in the ruins of Kotla Feroz Shah where he felt a supernatural presence and asked his followers to pray at the citadel of Feroz Shah. Therefore, devotees turn up every Thursday to pray at the Kotla Feroz shah so that their wishes could be granted.

Kotla Feroz Shah, sultan’s citadel was fortified with almost two kilometres of wall with battlements made of rubble construction and marked with semi-circular bastions, resembling those at Tughlaqabad Fort. It is roughly rectangular in plan and flanked by river Yamuna in the east. The west side of the citadel had the main fortified gateway. The enclosed area within the citadel was further divided into three rectangular spaces, out of which the northern and southern enclosures have not survived and consist of modern buildings. The central enclosure which is larger than the rest of the two consists of gardens, a palace, an audience hall, a baoli, a jami masjid and Asokan minar or the Lat Pyramid. One of the typical Tughlaq style mosques is two-storeyed plinth mosque. The first example is the Jami masjid located in the Kotla Feroz Shah. It has vaulted cells below on the first storey, while the prayer hall is on the second storey. Since the Yamuna flowed on the east side of the mosque, the entrance is on the north side with broad stairs leading to the domed gate. The now ruined central courtyard was surrounded by dome covered arcades.There is a narrow passageway behind the qibla wall which can be accessed by stairs in the northwest and southwest corners. The appearance of this passageway became quite common in later mosques. However, the purpose of this qibla passageway remains unclear. There also existed an octagonal dome supported by 8 square pillars in the central courtyard over a pool, on it was inscribed the Sultan’s Futuhat. The Lat Pyramid, located north of the Jami masjid, is one of the first buildings in north India to diverge from the basic parameters of Islamic architecture. The structure consists of a stepped pyramid that is three tiered with vaulted cells surrounding a solid centre. The staircases located on the corners lead to the upper level on which stands the Asokan Pillar which is 13 metres tall. This minar was known as ‘minar-i-zarrin’ (golden minar). Kalan Masjid is located outside the Kotla Feroz Shah compound but in the centre of Ferozabad. Constructed in 1387 by Khan-i- Jahan Junan Shah, it also has a two storeyed plinth plan. It has vaulted cells below and is accessible by a long flight of stairs on the eastern side which leads to a domed gateway. Over the gateway is the inscription of its patron. The prayer hall consists of 15 domed bays and five mihrabs. In the eastern half of the mosque, lies a pool in the centre, around which ia a rectangular open court with arcades of domed bays on top of huge square stone piers on three sides. There are other four mahals that have been ascribed to Feroz Shah Tughlaq: Kushk Mahal, Malcha Mahal, Mahipalpur Mahal and Bhuli-Bhatiyari ka Mahal. The basis for ascribing these to Feroz shah are: his passion for hunting, they are located in the regions developed by the Sultan, and the stylistic similarity across them; as none of these bear any inscription. While the former three are vaulted buildings containing a number of rooms, the latter is a large walled structure with a few rooms along the walls. The Bhul-Bhatiyari ka mahal is located at the northern end of the southern ridge, closer to Jahannuma palace.

a. Welch, Anthony and Crane, Howard. “The Tughlaqs: Master Builders of the Delhi Sultanate”. 1983
b. “Monuments of Delhi: Lasting Splendour of the Great Mughals and Others. Volume III Delhi Zail.”1997
c. https://homegrown.co.in/article/802733/the-history-and-mystery-of-feroz-shah-kotlas-colony-of-djinns