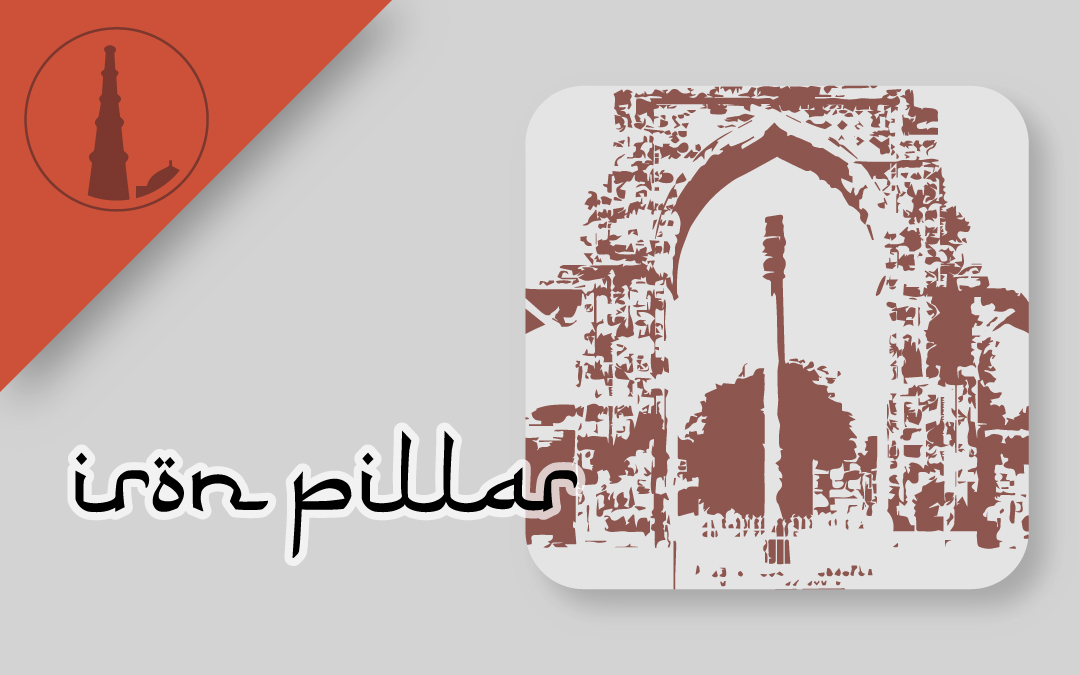 The Iron Pillar at Mehrauli dated at circa 5th century C.E. mentions a king name Chandra, who probably is identified with Chandragupta II of the Gupta Dynasty. The capital of the pillar has seven parts, the last being a block on which, probably, an image of Vishnu was rested to whom this pillar is dedicated. The Pillar is made of pure malleable iron with a specific gravity of 7.66. Dr. R Balasubramaniam of IIT Kanpur has studied the composition and making of this pillar in great detail and believes that the pillar is “a living testimony to the skill of metallurgists of ancient India. The beacon of light showing the way to the future is the Delhi iron pillar, with its tested proof of corrosion resistance.”
The original location and date of this pillar, however, has not yet been ascertained. King Angangpal of the Tomara dynasty is credited with the installation of this pillar in 1052 C.E., at its current site, as a symbol establishing the city of Delhi. Whether it was bought from another location, or re-installed in the same location is debated.
According to a legend mentioned in a chapter named “Killi-dhilli-katha” from PrithviRaj Raso, the pillar is driven so deep into the earth that it rests directly on the head of Vasuki, the king of serpents who support the earth. Rulers have tried to relocate the pillar but failed in their attempts. At best, one of the attempts rendered it loose (dhilli) which king Anangapal is credited to have “re-tightened”. This is one of the reasons that the region around the pillar came to be known as “dhilli” and later “dilli”.
The other version of the legend, the pillar is considered to be a long spike that pierces the head of Vasuki. When it is reinstalled, only 19 fingers’ length of pillar is driven back into the ground. Thereafter, sage Vyas prophesised to the king, that his dynasty would be unstable (dhilli) like the spike (killi) and after nineteen generations, it would be replaced by Chauhans and subsequently the Turks.
When Qutubuddin Aibak conquered Delhi, he was informed that as long as the pillar stood, Hindu rule would last. However, he rejected the prophesy and defied it by building a mosque close to the pillar, let alone allow it to stand.
In recent times the pillar has come to be associated with a different kind of belief and folklore- if a person standing with his/her back against the pillar is able to meet the fingers of two hands, then their wish would come true.

The entire length of the pillar is 23 feet and 8 inches out of which 1 foot and 8 inches are buried in the ground while the rest of the 22 feet are above the ground. The length of the capital is three and half feet which is bell patterned. It has seven parts: a reeded bell, a thin plain disc, three discs with serrated edges, another thin plain disc and a square block. The square block probably had an image of Vishnu, to whom this pillar is dedicated. The style of the pillar suggests that it belongs to the Gupta period.