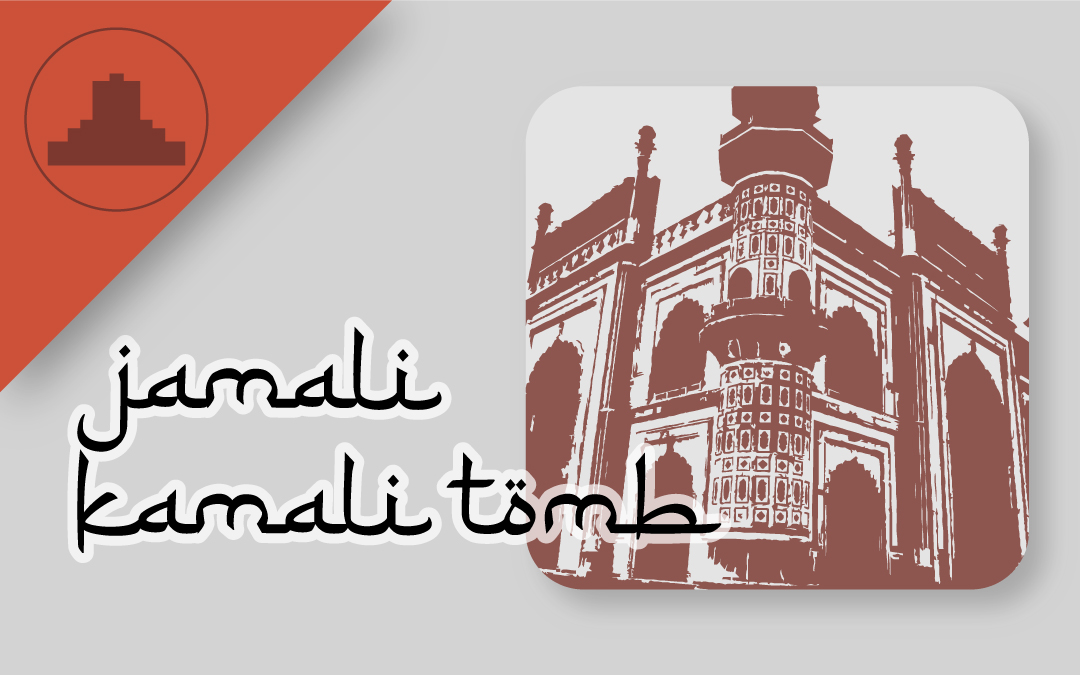 Jamali Kamali mosque and tomb belongs to Shaikh Fazlullah or Jalal Khan, better known by his alias ‘Jamali’. He was a 16th century mystic, traveller and poet who lived through the times of Sikander Lodhi, Babur and Humayun. His popular works include ‘The Sun and Moon’ and ‘The Spiritual Journey of The Mystics’. He died in 1535-36 C.E. while accompanying Emperor Humayun to Gujarat and was brought back to Delhi to be buried in his tomb. The construction of the mosque and tomb of Jamali began during 1528-29 C.E. While the construction of the tomb was complete in 1528, the mosque was completed during Emperor Humayun’s reign. It is located in Mehrauli. The tomb is a highly decorated structure and therefore, is also referred as the ‘jewel box’. It contains two male graves, while the central one is ascribed to Jamali the one on the eastern side to Kamali, whose identity is not established. It is probably named Kamali because it rhymes well with Jamali. Some opine that Kamali was a dear disciple of Jamali and therefore, was conferred the honour of being buried next to his master while others allude that the two were lovers and are therefore buried together. Another popular belief is that the place is haunted and inhabited by djinns.

The construction of the mosque and tomb of Jamali began during 1528-29 C.E. While the construction of the tomb was complete in 1528, the mosque was completed during Emperor Humayun’s reign. Therefore, the mosque is built in typical Lodhi style but also exhibits features that belong to the Mughal architecture such as the lotus medallions. This tomb and mosque belongs to Shaikh Fazlullah also known as Jamali. It is located in Mehrauli. The Tomb The tomb is enclosed by a wall and is located on the north of the mosque. The tomb chamber covers an area of 25feet sq. It has a flat roof and the materials used in the construction are stone and rubble. It is highly ornamented structure and is therefore known as the ‘jewel box’. It consists of a band of blue tiles below the chhaja and the parapet wall also has tile work in green and blue. The chamber is entered from the southern side. Inside the chamber, the northern and eastern sides have sandstone jali screens while the mihrab is located on the western wall. Beautiful tile work along with incised and painted plaster adorns the walls of the chamber. There are two male marble graves inside; none of them bear any inscription. The grave in the centre is ascribed to Jamali while the one on the east to Kamali. The Mosque The mosque is typical of Lodhi architecture, is single aisled and five bayed. It consists of a courtyard on the eastern side while the prayer hall is on the western side. The five bays are almost equal in size with their width being greater than their height. The central bay has a recessed arch that is highly decorated with lotus medallions, a feature that became popular in the Mughal architecture. The spandrels are decorated with projecting designs. Above the central arch is a small balcony window that is carved. The bands and carvings on the central arch are made of marble. On either side of the central arch are two turrets. On the western walls are five mihrabs, one for each bay out of which central and northern ones have Quranic inscriptions. The cental ceiling contains squinches or pendatives that give the structure an octagonal shape from which the high dome rises. On the southern and northern ends are stairways that lead to the roof. The mosque has three windows on the backside that contains bracketed balconies. Also, at both the ends of the building is an octagonal turret that that has niches and two rows of arched openings.

a. “Monuments of Delhi: Lasting Splendour of the Great Mughals and Others. Volume III Mehrauli Zail.”1997. b. https://en.wikipedia.org/wiki/Jamali_Kamali_Mosque_and_Tomb