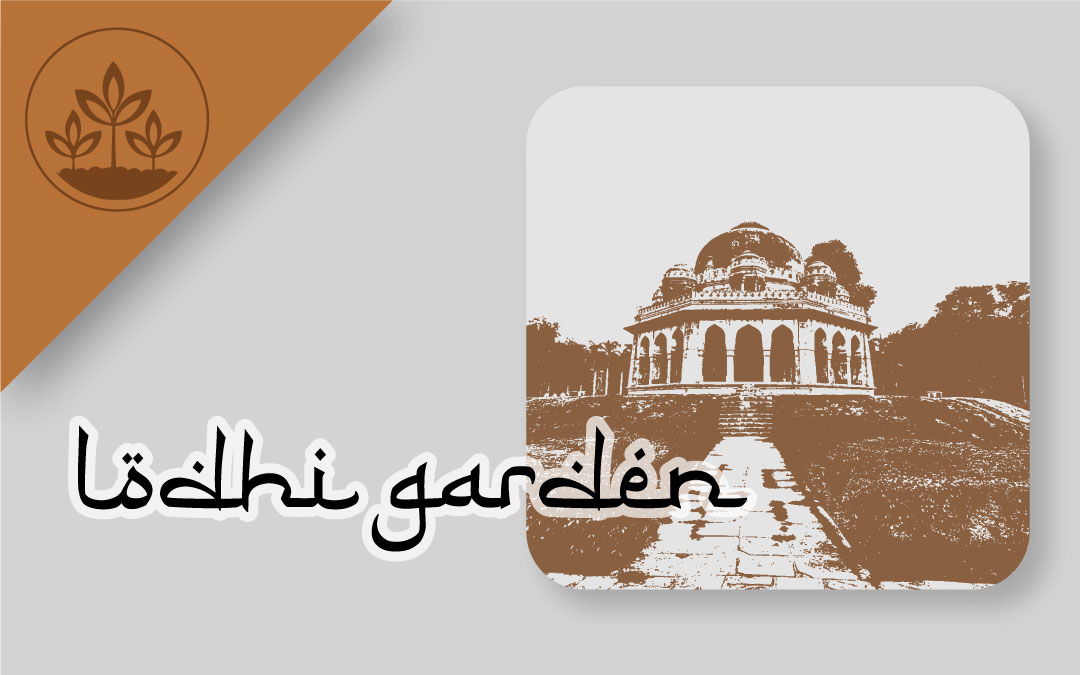 The Lodhi Garden consists of structures belonging to Sayyids, Lodhis and Mughals. Earlier the area was known as the village of Khairpur, in 1936 the villagers were displaced and it was called Lady Willingdon Park. After the independence, it was rechristened as Lodhi Garden and in the year 1968 was redesigned by J.A. Stein.
The garden consists of Tomb of Muhammed Shah Sayyid, Sheesh Gumbad, Bara Gumbad complex, Tomb of Sikander Lodhi and Athpula.
The tomb of Muhammed Shah Sayyid belongs to the Sayyid period. The Sayyid dynasty was relatively short lived ruling from 1414 to 1451 C.E. Muhammed Shah Sayyid was the third ruler of the Sayyid dynasty who reigned from 1435-45 C.E. The tomb of other Sayyids include that of Sultan Mubarak Shah who was the second Sayyid ruler, son of Khizr Khan and ruled from 1421-1434C.E. He founded the city named Mubarakabad, nothing of which remains and is supposed to be located near Khizrabad at the village called Mubarakpur Reti.
The façade of Sheesh Gumbad was once beautifully adorned in turquoise and cobalt blue glazed tiles and was hence named as the “Glass Dome”. Some historians ascribe the tomb to Bahlol Lodhi, the founder of the Lodhi dynasty who passed away in 1489 C.E. while others ascribe the grave of Bahlol Lodhi to be in the dargah complex of of Nasiruddin Chiragh-e-Roshan Dehlvi. The tomb contains several other graves, identities of which are unknown.
The Bada Gumbad complex consists of the Bada Gumbad, a mosque and a structure called Mehman Khana. The Bada Gumbad is considered to be a gateway as there are no graves inside. It was built during the reign of Sikander Lodhi who ruled from 1489-1517 C.E. He was the son of Bahlol Lodhi the founder of Lodhi dynasty.
The tomb of Sikander Lodhi resembles that of Muhammed Shah Sayyid with the only difference of the absence of the chhatris on the roof; the rest of the features remaining the same.
The Athpula consists of eight piers with seven arches built diagonally across a tributary of river Yamuna and was originally called ‘Khairpur ka Pul’. It dates to the Mughal period and was constructed by Nawab Bahadur during Akbar’s reign.

Tomb of Muhammed Shah Sayyid The tomb belongs to the third ruler of the short-lived Sayyid dynasty. It is octagonal in plan. It consists of eight chhatris at the centre of each side on the roof. The dome is crowned by inverted lotus finial. Inside the building the ceiling is adorned in incised plaster work. The arched jharokha pendatives are used from which the dome rises. The building consists of sloping buttressed columns at corner. The tomb has many other graves other than Muhammed Shah Sayyid, probably belonging to his family members. Sheesh Gumbad The façade of this structure was once beautifully adorned in turquoise and cobalt blue glazed tiles and was hence named “Sheesh Gumbad” or the “Glass Dome”. Some historians ascribe the tomb to Bahlol Lodhi, the founder of the Lodhi dynasty who passed away in 1489 C.E. The tomb contains several other graves, identity of which is unknown. It is square in plan with each side measuring about 17 meters. The eastern, northern and southern side has entrances while the western wall contains the mihrab. The openings on three sides include: a central doorway along with two arched openings. The western wall also has a hidden staircase that ends up at the roof of the building. The dimensions of the tomb chamber are 10 meters on each side containing a number of graves. Like the other Lodhi tombs, this tomb also follows the ‘double storeyed’ pattern. However, the difference like in the ornamentation and decoration of the building. It is marked with octagonal towers in the corners and an outward horizontal cornice divides the outer structure into two storeys. The Kangura pattern is also used in the decoration of the building. The square plan is turned into a circular structure with the help squinches and stone pendatives. Bada Gumbad complex Its name literally means a structure with a big dome. It is considered to be a gateway since there are no graves inside. The entrance is on the north consisting of a stairway rising about 4 metres from the ground, on the eastern side is the Mehman Khana and on the western side, a mosque. The Bada Gumbad is accessible from all the four sides and differs from other structures of this type as there is no miharab on the western wall. It gives the appearance of being double-storeyed while in reality being a single chamber. The roof edge is decorated with kangura or merlon pattern. The spandrels are made of black marble. The brackets located on the architraves of the arch are made in red sandstone with kalash carvings. The entrance to the Bara gumbad consists of a corbelled arch with a band of calligraphy. The dome rises from a 16-sided drum with an inverted lotus finial on top. Mosque- The mosques became singled aisled with three or five bays in the Lodhi period unlike the large congregational mosques of the previous times. The Bada Gumbad Masjid, located in the central portion of funerary gardens of the lodhis, is the first mosque typical of its architecture with being single aisled and five bayed. It has a rectangular plan. Being five bayed; it has five arches with the centremost being the tallest and framed by a ‘chajja’ (cantilevered projection). The three bays from the centre have a dome while the last two in each direction have flat roofs. The domes were crowned by lotus finials which continued in the construction of mosques in the Mughal period and also has kangura designed edging. The mihrab on the qibla wall had rounded turrets with upside-down lotus motifs on top which was reminiscent of the Tughlaq period. The structure also consists of jharokhas and corner turrets that resemble and remind of Qutub Minar. Incised and painted stucco work without the use of coloured encaustic tiles was used for the decoration of the mosque. The mosque is attached to other buildings: on the southern end to the Bada Gumbad and on the eastern side a hall which resembled the mosque called Mehman Khana. Mehman Khana This structure has arched compartments resembling the mosque, except the fact that it is devoid of domes and ornamentation. It was probably used as a guest house. The spandrels of the arches are made of red sandstones. Tomb of Sikander Lodhi It is located north of Sheesh Gumbad. The tomb is octagonal in shape bounded by a square wall enclosure measuring 76metres sq. with bastions on the corners. The complex is accessible on the south that contains and elaborate gateway along with two chhatris. The western wall carries a mihrab to function as a wall mosque. The tomb structure resembles that of Muhammed Shah Sayyid with the only difference of the absence of the chhatris on the roof; rest of the features remaining the same: the sixteen sided drum and inverted lotus finial. The tomb is decorated by brackets and kalash carvings. Inside the dome detailed tile work in green and blue has been done. Athpula The Athpula consists of eight piers with seven arches built diagonally across a tributary of river Yamuna and was originally called ‘Khairpur kaPul’. Today only a man-made reservoir remains as the stream has dried up. It is a Mughal period structure, constructed by Nawab Bahadur during Akbar’s reign. The total length of the bridge is 40meters and is 2metres wide. From the centre of each pier rises a circular fluted octagonal minaret dressed in stone whereas the parapet wall is carved with dressed stone. The central most arch is the biggest while the rest of 3 arches on either side decrease in size from the centre. Other structures at the Lodhi gardens include a walled gateway, a mosque and a turret.

a. https://artsandculture.google.com/exhibit/QRUxWeZM
b. “Monuments of Delhi: Lasting Splendour of the Great Mughals and Others Volume IV Badarpur-Shahdara Zail.”1997