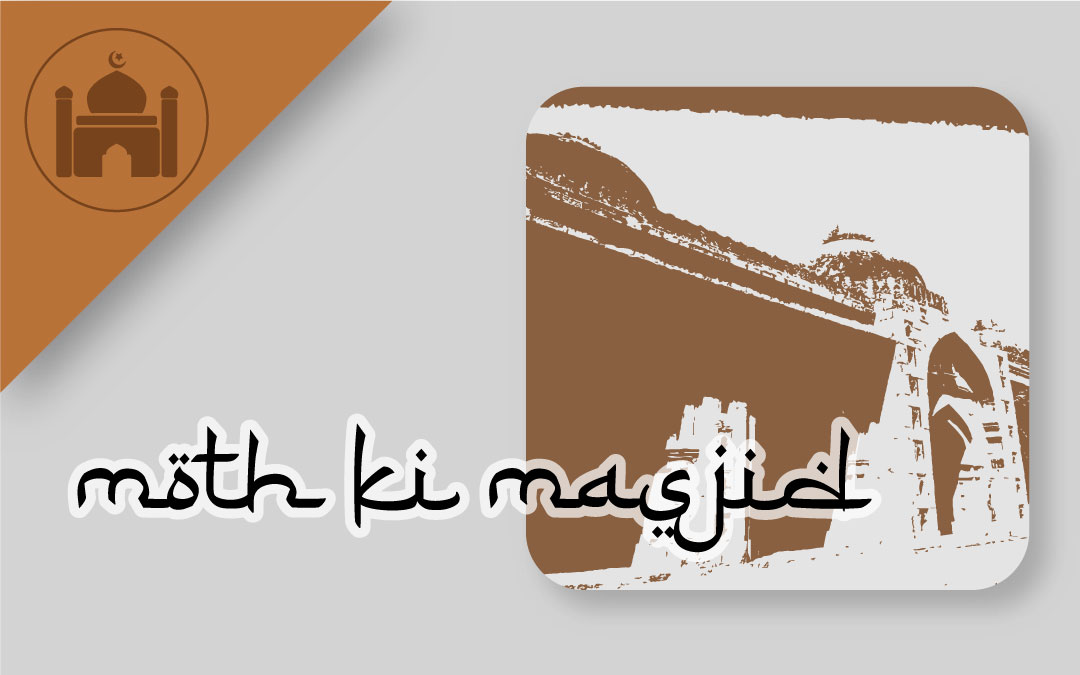 Moth Ki Masjid was constructed by a noble, Mian Bhuwa, in the court of Sikander Lodhi in the early 16th century. The courtyard of the mosque consists of three unknown graves.
The construction of this mosque is associated with legends. According to one of the narratives, Sultan Sikander Lodhi picked up a grain of ‘moth’ (a type of lentil) from the Jami Masjid and gave it to his minister Mian Bhuwa. The latter wanted to immortalise the grain, as it had been touched by the Sultan. He then sowed the grain which reaped him 200 grains. This process of sowing and reaping was continued for several years till the produce yielded a large amount of money enough for the construction of a mosque. He thereafter informed the Sultan about the construction of the mosque and the story behind it. From then on the masjid is called Moth ki masjid. Another narrative mentions the same story, although with a slight variation. This narrative mentions that the grain of ‘moth’ was given by Sultan Sikander Lodhi to his minister in an attempt to play a prank on the latter. However, Mian Bhuwa took the grain in a good spirit which finally culminated in the construction of the mosque.

This mosque was constructed by a noble, Mian Bhuwa, in the court of Sikander Lodhi in the early 16 th century. Typical of Lodhi architecture, this mosque is also single aisled and five bayed. It rests on a raised platform with chambers at the lower level. The mosque is accessible by a flight of stairs on the eastern gateway. The gateway is made of red sandstone, is carved and carries a beam bracket arrangement. The eastern part of the structure has domed pavilions known as ‘chhatris’, an essential feature of Rajput architecture which became prominent and continued in the Mughal architecture as well. The prayer hall consists of five arched openings with the central opening made up red sandstone and a small opening above the arch. Above the arch rested a ‘chhajja’(cantilevered projection) and the roof of the mosque had 3 domes: one at the central bay while the rest two were on the end bays. These domes were topped by inverted lotus finials. Similar to the arched openings in the Bara Gumbad masjid, this masjid also has arched openings at two levels on the north and south walls with the upper opening as a projecting balcony. The qibla wall consists of two circular towers, again at two levels, along with the arched openings, while the mihrab on the qibla wall carries two turrets. The courtyard of the mosque consists of three unknown graves. Red sandstone, white marble, coloured glazed tiles and stucco (incised and painted) are used to adorn the masjid. The prayer hall is decorated with calligraphy and arabesque carved in stucco.

a. “Monuments of Delhi: Lasting Splendour of the Great Mughals and Others. Volume III Mehrauli Zail.”1997.
b. https://en.wikipedia.org/wiki/Moth_ki_Masjid
c. Sharma, Jyoti. P, “A Cross- Cultural Dialogue: A Case Study of Pre-Mughal Mosques in Delhi”, 2002.