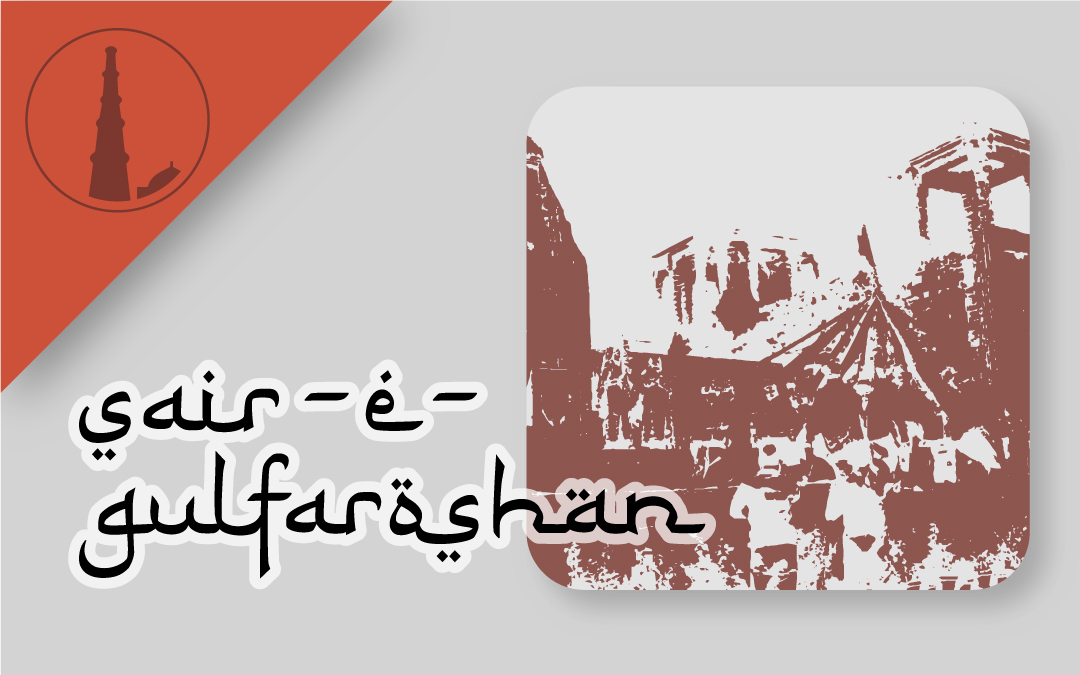 The origin of Phoolwalon ki Sair lies in an interesting story. The younger and favourite son of Akbar Shah II got into conflict with the British Resident, Sir Archibald Seton over the issue of succession. Enraged, Mirza Jehangir shot the latter from one of the buildings in Red Fort. Although, Sir Archibald was not hurt, one of the guards got killed. Thereafter, Mirza Jehangir was sentenced to exile in the Allahbad Fort. Grief stricken by the incident, the mother of Mirza Jehangir, Mumtaz Mahal Begum prayed that if her son returned to home safely she would offer a chadar at the dargah of Qutubuddin Bhaktiyar Kaki. Her prayers were answered and Mirza Jehangir was released. In accordance with the promise she had made, preparations were done for the floral canopy and chadar to be offered at the dargah. In addition, the flower sellers made pankhas which were subsequently offered at the Jog Maya Temple. The queen walked barefoot, as she had vowed, even though the flower selles spread a carpet of flowers as she walked. Every year thereon, it was made sure that the offerings and visit was paid to both the temple and dargah. The practice of Phoolwalon ki sair was discontinued after 1857. Afterwards, it was practiced by the British Commissioner of Delhi. During the massive Quit India movement, the British government put a ban on it to avoid huge gatherings. Post-independence, Pt. Jawaharlal Nehru requested Yogeshwar Dayal to revive the Sair-e-Gulfaroshan. In the year 1962, under the Societies Registration Act, the sair was registered. Jawaharlal Nehru attended the 1962 sair marking it as a symbol of Hindu-Muslim harmony. Every year the Sair-e-Gulfaroshan takes place after the monsoons. The President and Lt. Governor of Delhi begin the procession from Town hall in Chandini Chowk to Mehrauli. On Thursday, the procession proceeds towards the dargah of Qutubuddin Bhaktiyar Kaki where the chadar is offered by the Hindus while on Friday, the procession goes to the Jog Maya Temple where the pankhas are offered by the Muslims. The next day is marked by cultural programs at the Jahaz Mahal. Apart from the structures mentioned above, important venues for the sair also include- Zafar Mahal and the tomb of Adham Khan or the Bhool Bhulaiya.

Adham Khan’s Tomb Although built by Akbar in 1652 C.E. for Adham Khan and Maham Angah, it is built in octagonal shape in Lodhi style with diameter 43 feet 9 inches. It is constructed out of grey sandstone and rubble masonry. It also consists of a court that is octagonal with a low round tower at each corner. The verandah enclosing the tomb is also octagonal with a total of 24 arches, 3 on each side. The dome rises from a high16-sided drum with a small minaret at each angle and is topped by a heavy red sandstone finial. The unique feature about this building that makes it different from tombs of this type is that it has no chhajjas. It is also known as Bhul Bhulaiyan due to the fact that it consists of maze of passages within the thickness of walls above the doorways. Temple of Jog Maya The temple of jog maya is enclosed by a wall and has an entrance on the southern end. To the north of it lies another temple that is dedicated to Shiva. The temple has a pyramidal dome topped by a gold covered pinnacle. It has an arched verandah that around the temple and a no. of arched dalans that are used by the pilgrims as dharamshalas. The temple is made of marble and inside the pratima of jog maya is placed above which are hung the pankhas from Sair-e-Gulfaroshan. There is a small pavilion located opposite of the temple doorway that consists of a number of bells and two stone tigers in a cage. On the east of the temple is an attached room with a vaulted roof. The southern gate opens into the temple while the rest of the gateways open outside. According to the popular narrative, this chamber was added by Emperor Aurangzeb, this is however doubtful. Traditionally, this temple is ascribed to be of ancient origin; however, the current structure is erected by Sed Mal who was a noble in the court of Akbar II.

a. www.rekhta.org
b. https://www.hindustantimes.com/delhi-news/phool-waalo-n-ki-sair-when-delhi-says-it-with-flowers/story-QtOj9tULIGgugGWOK1PmSM.html
c. “Monuments of Delhi: Lasting Splendour of the Great Mughals and Others. Volume III Mehrauli Zail.”1997.