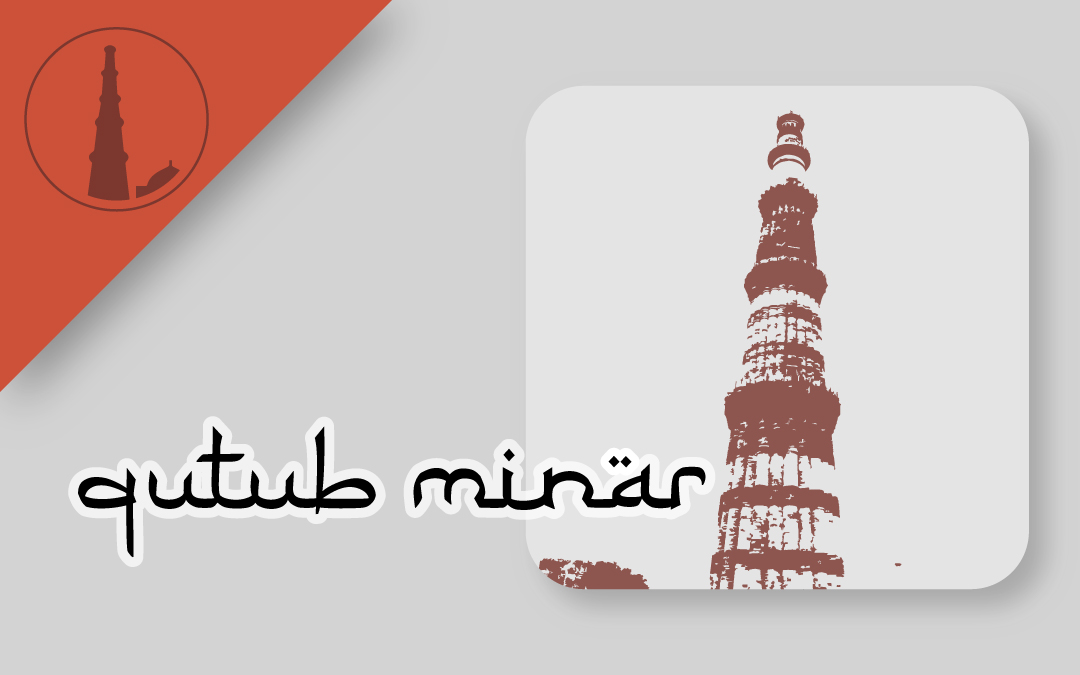 Qutub Minar, meaning the axis or pole of islam, is amongst the main tourist attractions of Delhi. The minaret is also adorned by beautiful calligraphy on stone. Built to assert the supremacy, suzerainty and presence of Islam in the Hindu heartland, the site for construction was chosen as the centre of the Rajput bastion of Qila Rai Pithora. It is the tallest rubble masonry minaret constructed in the world. It was built simultaneously with the Quwwat-ul-Islam mosque as the minar for the muezzin to perform the ‘adhan’, the call for prayer. However, there is still some debate on the historicity of this heritage site. Some historians believe that it was Iltutmish (altamash) who ordered and had the means to construction this minaret, and did so as a mark of his respect for Qutubuddin Bakhtiar Kaki, whose shrine is right behind this complex. The minar has a long mysterious history, and is entwined with ancient legends.
There are two interesting facts about the Qutub Minar: every year the minar does not cast a shadow on 22nd June whereas on other days, it has a shadow even at noon. This is due to the structural leaning of the minar.
Another astonishing fact is that the tallest minar in the world is shorter than Taj Mahal. This is unimaginable due to the fact that Taj Mahal is very propotionally constructed.

The newly established Delhi Sultanate looked westwards for inspiration which is reflected in its architecture. The great Qutub Minar is based on Ghurid prototypes. It is the tallest rubble masonry minaret constructed in the world. The minar is constructed of red and buff sandstone with marble being added on later in the 4 th and 5 th storeys. The total height of the minar is 234 feet with 5 storeys. These five storeys consist of five intricately decorated balconies along with bands of inscriptions interlaced with ornamental designs. Base of the minar or the first storey- It is 94 feet 11 inches in height. It has 27 canonical edges and 27 circular ones, which some historians believe could allude to the design of an observatory to study the constellation movement of stars. It is adorned by six ornamental bands of inscription. 2 nd storey- It is 50 feet 8 ½ inches in height. It consists of semi-circular fluting along with two bands of inscriptions. 3 rd storey- It is 40 feet 9 ½ inches in height. It also has two bands of inscriptions, but the fluting is angular unlike the second storey. 4 th storey- It is 24 feet 4 inches in height. The surface is circular and fluting is absent. It is made out of marble. It has only one band of inscription. 5 th storey- it is 22 feet 4 inches in height. It is also circular, devoid of fluting with alternate use of red sandstone and white marble in a banded fashion. The base of the minar was constructed by Qutub-ud-din Aibak, however the minar was finished by his successor Shamsuddin Iltutmish. Later, the 4 th storey was repaired by Feroz Shah Tughlaq, which was damaged by lightning and a fifth storey was added to the minar. The minar was crowned by a cupola which was intact till1794. However, it was damaged by an earthquake and was replaced around 1828 by a sandstone cupola, topped by a flagstaff and designed by Major Smith. The gothic balustrades that now adorn the balconies are also his contribution. Later, this cupola was removed from the minar. Several repairs and restoration works were carried by Major smith, though injudiciously many a times in the wrong order and manner.